The life of Enoch Adejare Adeboye is a fulfillment of the scriptures in Zechariah 4: 10 which declare, “despise not the days of small beginnings”.

Born in 1942 into a humble family in the village of Ifewara, Osun State located in the South-western part of Nigeria Enoch Adeboye often humorously states that his family was so poor that even the poor people called them poor. As a matter of fact, he unashamedly tells his congregation that he never owned shoes until he was eighteen years of age. What he possessed though were physical intangibles such as focus, consistency, diligence, ambition, a brilliant mind and a determination to succeed in life.

In 1956 Enoch Adeboye was admitted into Ilesha Grammar School, Ilesha, Osun State, Western Nigeria and as a youth he discovered a passion for books, and an aptitude for science and in particular the field of Mathematics. This led to an academic journey in the field of Mathematics against incredible odds including but not limited to finances, the Nigerian Civil War and academic politics. By the time he was done, Enoch Adeboye had obtained not only a Bachelors (BSc.) degree in Mathematics from the University of Nigeria, Nnsukka, Nigeria in 1967, but also a Masters (MSc.) Degree in Hydrodynamics and a Doctorate Degree (PhD) in Applied Mathematics, both from the University of Lagos, Lagos, Nigeria in 1969 and 1975 respectively.

One of the motivations for these academic achievements was Enoch Adeboye’s passionate desire to become the youngest Vice Chancellor (University President) of any one of the frontline Universities in Nigeria. It did seem that his academic ambition would be realized as his academic career flourished. However, this was not to be as a greater career awaited him in the service of the Lord. In 1967 Enoch Adeboye got married to his beloved wife Foluke Adenike Adeboye (nee Adeyokunnu).

Ask and it will be given. Seek and you will find. Knock and the door will be opened for you. — Luke 11:9

But seek first the kingdom of God, and His righteousness; and all these things shall be added unto you. — Matthew 6:33 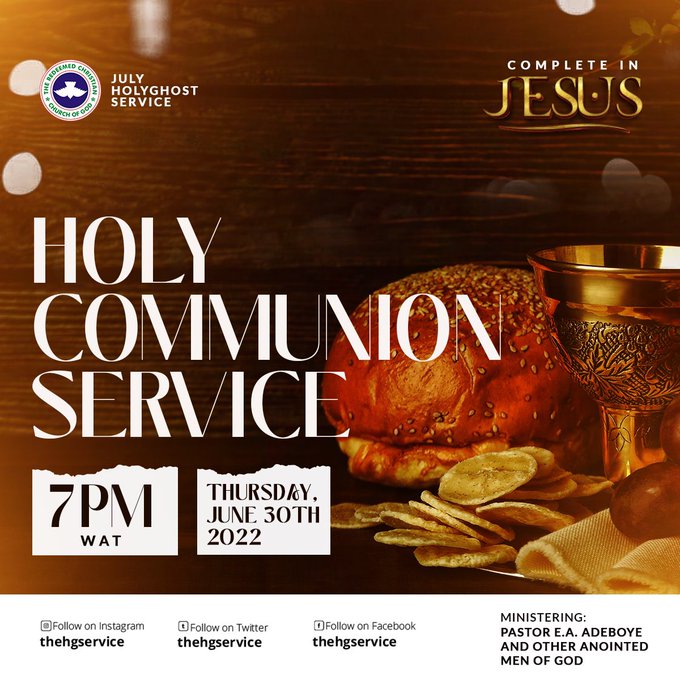 Pastor Adeboye
PastorEAAdeboye
Shalom saints!
Do you want to be complete in Jesus?
Then join us for the July 2022 Holy Communion Service happening today by 7pm WAT.
It’s going to be a life transforming encounter with Jesus.
Don’t miss it!
Be there!
... 1.2K Likes 199 Retweets 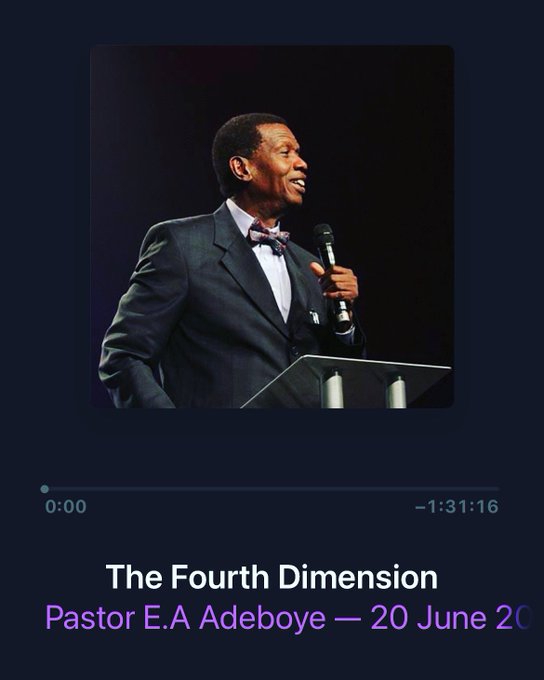 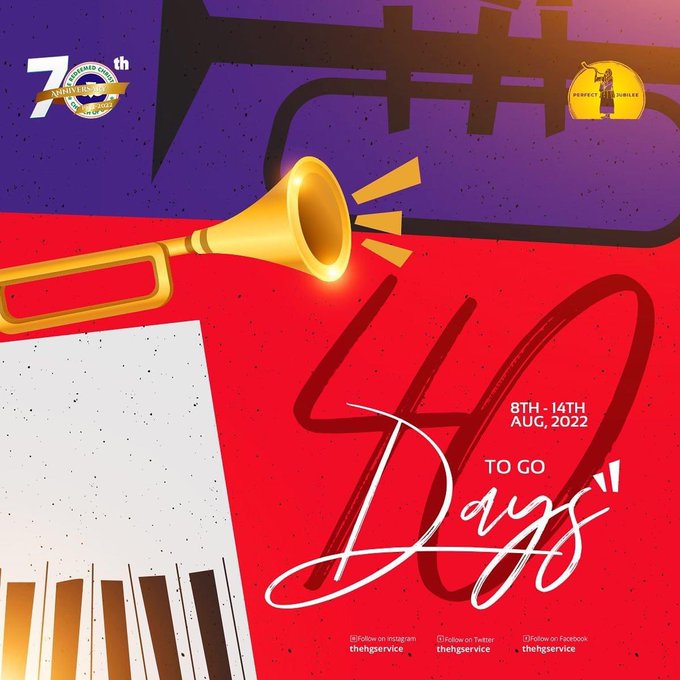 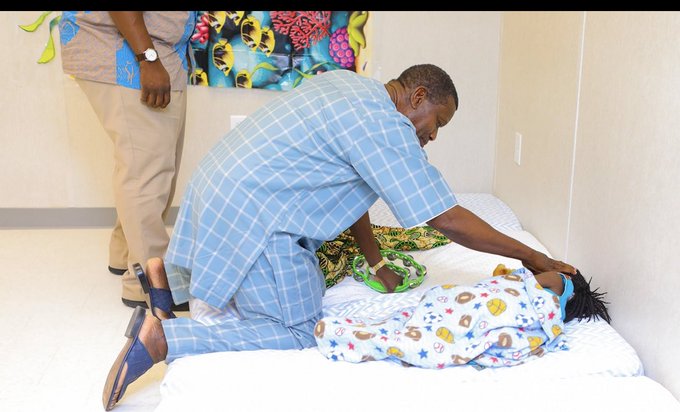 Pastor Adeboye
PastorEAAdeboye
For you FATHERs, on this father's DAY.
You belong to the order of men who live to a full ripe old age.
You belong to the generation who sees their children's children up to the fourth generation.
Happy Fathers Day... 14.4K Likes 1.7K Retweets 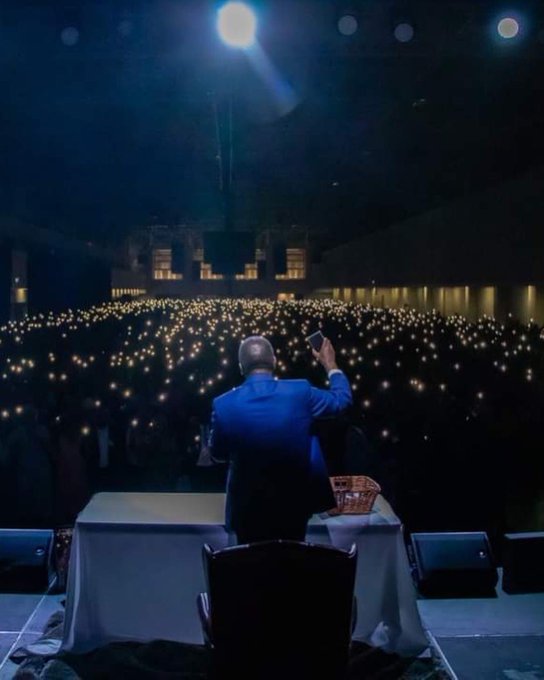 Pastor Adeboye
PastorEAAdeboye
I pray for you today that according to the word of God in Isaiah 60, you will rise and your light will shine. Those around you will come to the knowledge of Christ through your testimonies as a result of... 24.7K Likes 4.1K Retweets 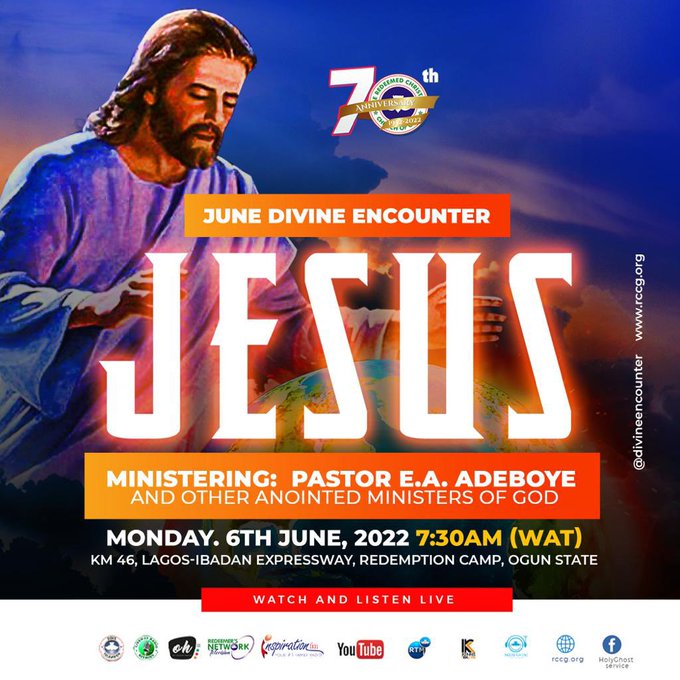 Pastor Adeboye
PastorEAAdeboye
Jesus wants to have a divine encounter with you.
When He does, certainly your life will be greatly transformed.
Join us for the June 2022 Divine Encounter.
The invitation is open. Honour it!
#JESUS https://t.co/D1huvwQaBg 2.1K Likes 287 Retweets 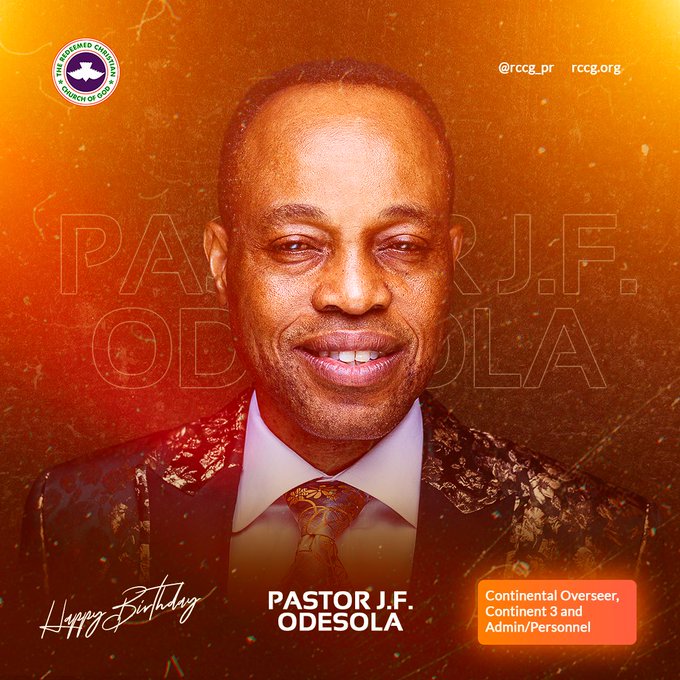 Pastor Adeboye
PastorEAAdeboye
Happy birthday @PastorJFOdesola
I am grateful to God for your life, family, ministry and calling.
God bless you greatly and increase you on all sides in Jesus Name. https://t.co/35JbmYZga9 2.3K Likes 140 Retweets 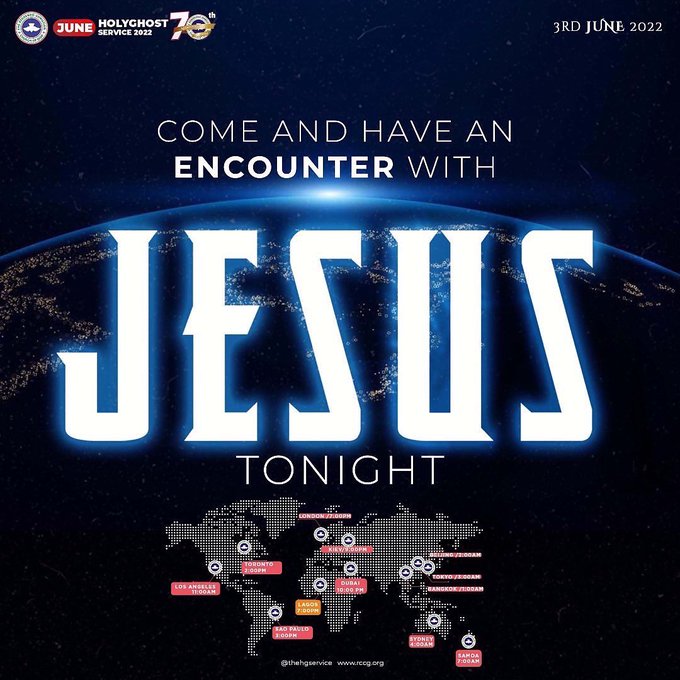 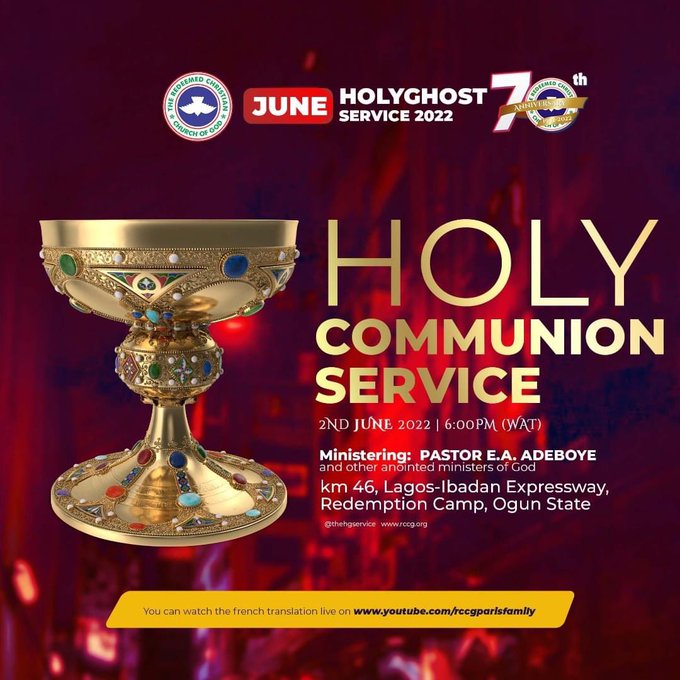 Pastor Adeboye
PastorEAAdeboye
Join us for the June 2022 Holy Communion Service this evening.
It’s an important meal that was prepared by Jesus.
Come and have an awesome experience.
#Jesus #JesusChrist #holyghostservice https://t.co/2kImOOkICn 674 Likes 106 Retweets 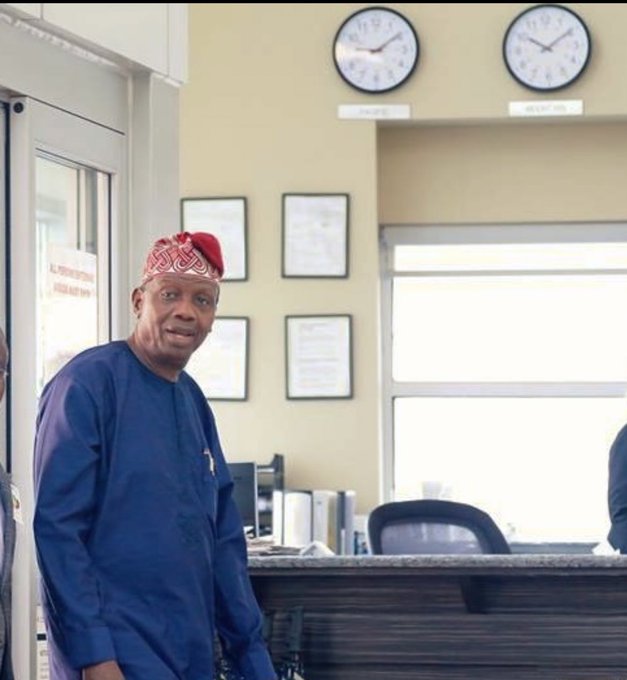 Pastor Adeboye
PastorEAAdeboye
Congratulations saints, you made it to the middle of the year; Glory be to Jesus. God will set you on high and will disappoint the devices of the evil doers against you in Jesus name. https://t.co/cpKgP8YPal 30.3K Likes 3.4K Retweets 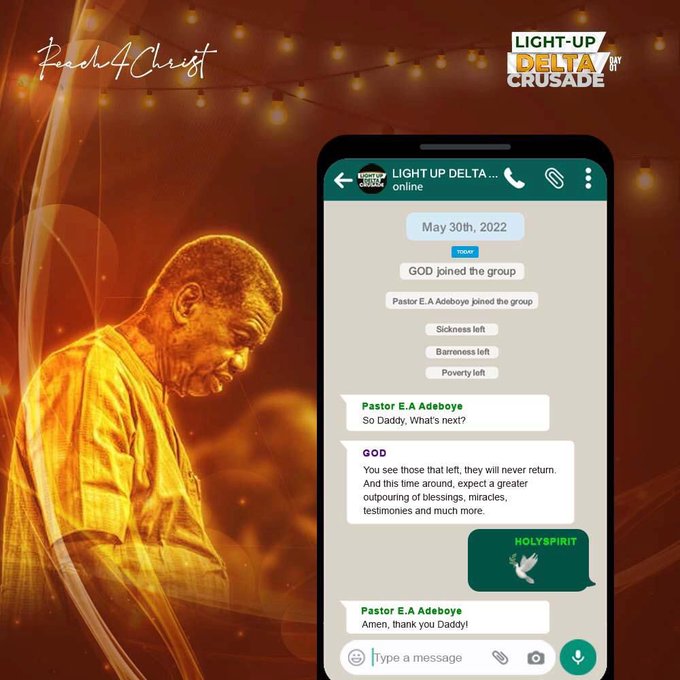 Pastor Adeboye
PastorEAAdeboye
In the name above every other name, none of you who call me Daddy will die before your time.
@rccg_pr @reach4christ https://t.co/3h9qnJUS90 1.8K Likes 216 Retweets
Pastor Adeboye
PastorEAAdeboye
They will be called oaks of righteousness, a planting of the Lord for the display of his splendor.”) will be your portion in Jesus name. 880 Likes 91 Retweets 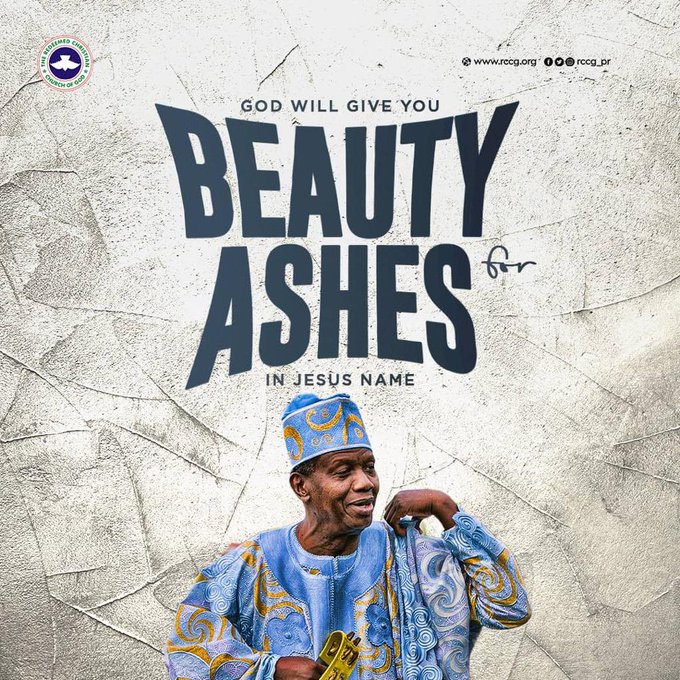 Pastor Adeboye
PastorEAAdeboye
This week, the promises in Isaiah 61:3 (And provide for those who grieve in Zion – to bestow on them a crown of beauty instead of ashes, the oil of gladness instead of mourning, and a garment of praise instead... 5K Likes 591 Retweets 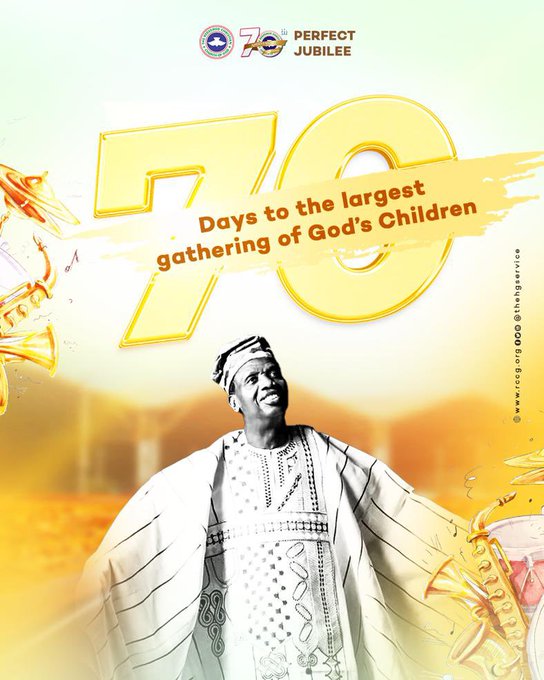 Pastor Adeboye
PastorEAAdeboye
As of today, we have 70 days to the 70th Anniversary of the Redeemed Christian Church of God which is also the Annual Convention. The theme is PERFECT JUBILEE and God is set to do great and mighty things during... 3.2K Likes 565 Retweets 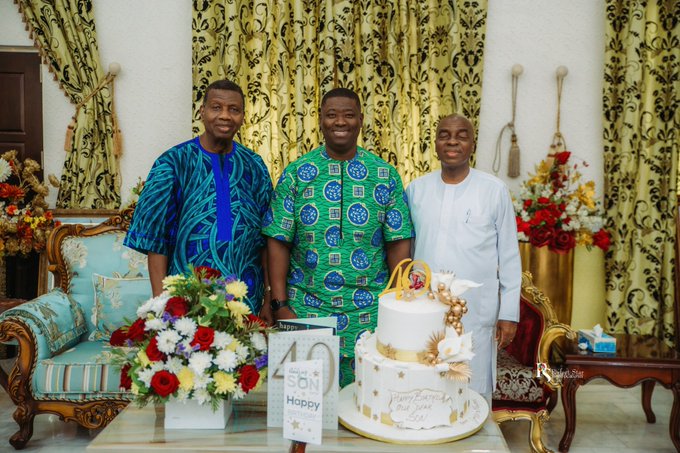 Pastor Adeboye
PastorEAAdeboye
Happy birthday @lekeadeboye . It is my sincere prayer for you that as you clock 40 today, you will be filled with fresh fire and anointing from on high in Jesus name.
Happy Birthday Son. https://t.co/sCNqloVXs4 6.7K Likes 475 Retweets